The Last Thing I Remember…

…was laughing hysterically at this guy’s hair-do.

Besides ads for practical jokes and opportunities to get paid in cash or prizes for selling newspapers/greeting cards/seeds, a lot of ads in comic books were aimed squarely at the 98lb weakling tapping into adolescent power fantasies and the possibility of becoming so much more than mere old you quickly, easily and painlessly. Comics were the perfect vehicle for these sort of ads because mainly kids read them, and they were too young to realize that there’s no such thing as a free lunch. Kids can usually be counted on not to put two and two together and figure out that if perfection was so easily attainable, everyone would have rippling muscles and/or the ability to bisect bricks with bare hands.

At the time, I fell for the scam, too. I ordered ALL of the Fighting Secrets of the WORLD for only 25¢. Eventually I received a two-color, hard-sell brochure for an encyclopedia set that detailed in stunning illustrations and easy-to-follow text ALL of the Fighting Secrets of the WORLD, but it wasn’t 25¢. I forget how much it was, but I sure didn’t have it, and there was no way that Mom and Dad were going to send that kind of money through the mail. Was I crazy?

I wish I hung onto the brochure. It did have terrific pictures of a guy who had developed a neck of STEEL smiling as someone attempted to strangle him with piano wire and another guy warding off an attacker with a rolled up magazine. It was great stuff!

I had already gone through my disappointing experience with the other company and realized that there were no free lunches when I started to see the ad below:

It was a full page ad and about as subtle as a brick through a plate glass window. I laughed. Count Dante? Who was he supposed to be? A funky Count Dracula who knew karate? What’s with his hair. 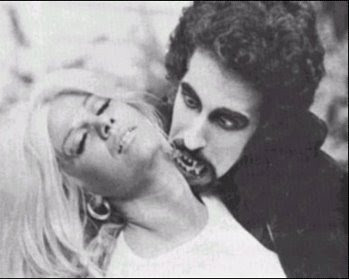 He reminded me of the guy who played Dracula in Al Adamson’s truly awful Dracula vs. Frankenstein from 1971. Dracula had a similarly poofy hairdo as the Deadliest Man Alive and was laughable when trying to appear serious.

As it turns out Count Dante was a real guy! He was born John Timothy Keehan and eventually took the name Count Juan Raphael Dante creating a fictitious back-story that was a lot more exotic and interesting than an Irish-American guy from Chicago. He created the Black Dragon Fighting Society and heavily promoted himself through comic books. His life would make one hell of a movie with martial arts battles, feuds with rival schools, bank heists and mob lawyers. Keehan before he became Count Dante was also a hair dresser and had reportedly worked on some of the hair designs for Playboy models back in the ’60s. This story has every thing!

Sadly, what the story doesn’t have is a happy ending. The Count died of internal hemorrhaging caused by a bleeding ulcer, on May 25, 1975. The Deadliest Man Alive was no more.

The ad at the top of the page appeared in Fantastic Four No. 159 which was published by Marvel Comics in 1975. This issue was probably still on the stands when Dante passed away.